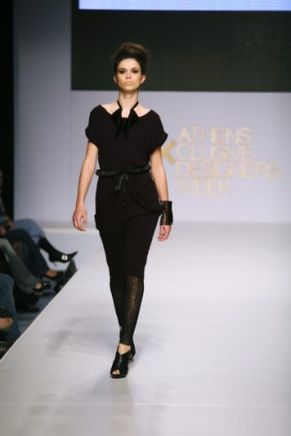 Melissa Diamantidi graduated from Parsons, New York, in 2008, and in the same year, moved to London to work under the guidance of Roland Mouret. She reflects on this time as the most formative in her design career as it filled her with the determination and confidence to launch her own label. Sure enough, six months later and out of her own flat Melissa started to work on her own collection.

Melissa's background has become an inexhaustible source of inspiration. She first pursued a degree in fine art at UCA, she took courses in photography, design and finally a second degree in Business Law before setting her mind on fashion design. Moving between the world of academia and creativity she managed to absorb the best of both.

Indeed, bridging different worlds is something Melissa has done since childhood. Growing up in the Athenian outskirts she combined the tranquility of a rural environment with the bustling opportunities on offer in the European metropolis; she is half Greek, half English, speaks both languages fluently and enjoys splitting her time between the UK and Greece.

This eclectic mix and match of elements in her individual life resonates with her designs. Her collections combine classic silhouettes with splashes of spontaneity and sharp detailing. The designer's dedication to the multifaceted nature of women is why her clothes are so desired by confident, sociable and intelligent women.