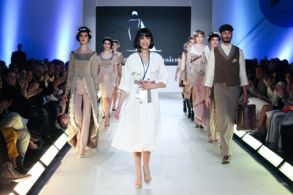 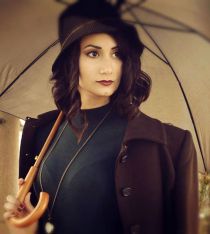 Andry Anastasiou was born on October 7th, 1994 in Limassol, Cyprus. She graduated with honors from AKTO School of Art & Design in Athens. Her love for fashion, history of art and her admiration for the old and the new in fashion history, are the main sources of inspiration for the designer. Her creations are characterized by femininity, elegance and geometry. At the 19th ATHENS XCLUSIVE DESIGNERS WEEK in Athens, she will present a collection for Autumn / Winter   2016-2017 titled "Μία βαλίτσα...τόσα ταξίδια" (One suitcase...so many journeys).  The collection combines tradition with modern elements. Her inspiration was her great-grandfather's travel suitcase, with which he travelled the world 80 years ago to sell the Lefkaritika embroidery, the most important kind of embroidery in Cyprus, which has unfortunately been forgotten. Her aim is to continue this "journey" keeping the tradition and craftsmanship of her homeland alive, through fashion.  The designer was also involved with the design of theatrical costume by designing and supervising the costumes for the theatrical show "KAPNOKRATOR" at Michalis Cacoyannis Foundation in February 2016. Role models and inspiration for the designer are personalities from the old cinema, such as Audrey Hepburn and Rita Heyworth.