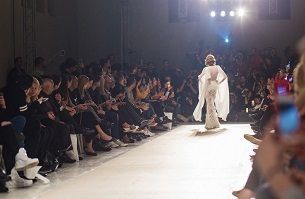 Athens Xclusive Designers Week has the pleasure to host as Special Guest Mrs. Anna Molinari, founder and Creative Director of the legendary brand Blumarine, for a special fashion show to be held at Zappeion Hall, presenting the new BluGirl collection SS18/19, for the first time in Greece.

In addition, this season, Athens Xclusive Designers Week has the honor to support the Bring Them Back organization (www.bringthemback.org, https://www.facebook.com/BringThemBack/) aiming the return of the Parthenon Sculptures to their rightful place, Athens. Athens Xclusive Designers Week incorporates the Bring Them Back campaign across the range of its activities, inviting all participating designers and visitors to say their own 'Bring them Back' through the actions that will surround this great purpose.

Four days of Athens Xclusive Designers Week will feature the designers' fashion shows, the New Designers Awards competition and awarding ceremony, the Fashion Design Project open design sketch contest, as well as many side events which will be announced soon.

The Fashion Week of Athens continues to fulfill and serve its mission to "export Greek fashion globally", strengthening further its domestic and international collaborations network, enhancing its commercial profile, and continuing to be the ultimate meeting point of the Greek fashion industry. Furthermore, Athens Xclusive Designers Week nurtures and promotes new talents for one more season, through the New Designers Awards platform.

Αthens Xlusive Designers Week, is the official fashion week in Greece, established in 2007, which aims to promote Greek designers within and beyond Greek borders, and to connect them with the international fashion sector. The official Fashion Week of Athens is the only fashion institution in Greece that has had the honor of hosting the fashion shows of some of the leading international fashion houses such as Vivienne Westwood, Ferragamo, Guy Laroche, Krizia, Barbara Bui, Emanuel Ungaro, Cacharel, Escada, DSquared2 to name a few, along with established Greek and emerging fashion designers.

For more news and details about AXDW: