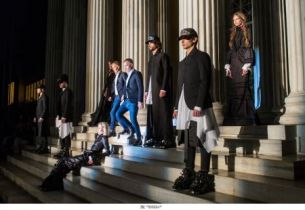 Another Athens Xclusive Designers Week has been accomplished with great success, at Zappeion Hall with the participation of prestigious Greek designers, as well as fashion brands, and upcoming new designers showcasing their new collections for the season to come. AXDW had also the pleasure to welcome and host as guests of honour the globally famous DSQUARED2 brand and its creators, Messers Dean & Dan Caten, in a unique special appearance. Creativity, talent, exceptional guests, numerous happenings have been the main prerequisites for the successful completion of this celebration of fashion.

The first day begun with the fashion shows of the Greek designers Kathy Heyndels & Giannetos Handmade with elegant gowns, and haute- couture garments, followed by an original show by .LAK (Lakis Gavalas) titled "just woke up" and presenting modern nightwear and underwear collection in a special setup.

The inauguration night of the 21st Athens Xclusive Designers Week was marked by the spectacular appearance of DSQUARED2, who presented selected pieces of their FW17 "Glunge" collection, on the majestic grand staircase of Zappeion Hall. The stairway of the impressive entrance of Zappeion Hall was transformed into a live fashion show installation. Dean & Dan Caten impressed their fans that enthusiastically "flooded" in Zappeion on that Friday evening. Ms. Tonia Fouseki, founder and CEO of Athens Xclusive Designers Week welcomed the designers and introduced them to the audience.  Dean & Dan Caten thanked Ms. Fouseki in Greek, while expressing their deep love for Greece, their "second home" as they call it. The first day was concluded with a private cocktail party at Dionysos Zonar's, in an amazing atmosphere, next to the breathtaking view of Akropolis where the guests enjoyed the music of Dj Alexandros Christopoulos

The following days the guests had the opportunity to enjoy several inspired creations, such as those of "Out of space" collection of Parthenis AW17, shirtdresses and tops with stripes by Evi Grintela in green and light blue colour palettes. In addition the Greek fashion brand Brokers showcased its FW17/18 modern casual collection dominated by menswear jeans, tshirts, and tops. "The Spring Butterflies" was the collection of Olga Karaververi, inspired by the spring colours and breeze, and mainly by butterflies' beauty. Celia Dragouni presented an ethnic collection including colours such as red, black, white and green.

The third day of AXDW on the other hand, was dedicated to the New Designers Awards by Amstel Radler, during which 12 upcoming designers presented their collections and were evaluated by a jury, comprised of renowned representatives of the fashion world. The New Designers were awarded with the following awards: Best Catwalk, Best Trendsetter, Best New Designer and a final audience award namely Fashion Refreshment Award.

The CEO of Athens Xclusive Designers Week, Ms. Fouseki, congratulated all participants of the New Designers Awards by Amstel Radler while underlining the importance of having dreams, setting goals and managing to accomplish them.

The New Designers that were awarded during the 21st AXDW are the following:

Best New Designer: Avgousta Theodoulou- Collection "DAEDALEA" talks about the human struggle to achieve freedom and higher quality of living, as well as for the pitfall of using intelligence without wisdom which can lead to decay and tragedy. In fact, there is a thin line before this struggle reaches its dark side: greed. The designer's award provides her with the opportunity to visit the upcoming London Fashion Week in February 2018 whereas she will be able to attend the International exhibition of New Designers at the International Fashion Showroom that is to be organized by the British Council.

Best Trendsetter: Ioannis Roumeliotis - Collection "ILLEGART", an impressive mix of mens and womenswear with impressive transparent looks with details and special cuts in white, blue and black. The award corresponds to a full year scholarship at the AthensFashionClub Fashion.

Best Catwalk: Chrysafis Stefanos- A combination of self-knowledge and acceptance, "Phreno" collection declares the guiltiness of the human existence within the bounds of disturbance and tries to corrupt the already corrupted "ego". The designer will be featuring in a special presentation at GYNAIKA magazine.

Finally, in collaboration with the sponsor of New Designers Awards Amstel Radler, η AXDW added an extra, 4th audience award, the "Fashion Refreshment Award" that promotes and underlines the importance of team work. Each designer that participated at the New Designers Awards by Amstel Radler, paired with an experienced blogger and co-created a lemon- inspired look. Each of these looks was uploaded on an online platform where the audience was able to vote their preferences. The collaboration that impressed the most the audience was that of Chrysafis Stefanos with Lavinia Stathaki, blogger of Drums of Fashion.

The third day was concluded with the fashions shows of  ΘΕΟ (Theodoros Eleftheriadis) who showcased a shoe collection entitled "Wear the Luxury", followed by Christina Zafeiriou in a collection dominated by impressive creations characterized by transparent garments and fringes.

The fourth and last day of AXDW was initiated by an impressive, one of a kind fashion show, that of Vassilis Zoulias and his demi couture collection titled "Women in the Garden". The fashion show took place at the 1850 Victorian style gazebo of the Royal Gardens of Athens. The collection's palette was dominated by black, white, and red with lacy details. Imposing jewelry pieces by Pericles Kondylatos added the final aspect of perfection to each look, creating an even more "vintage" element at the Royal Gardens.

Laces, leather garments, fringes were the main characteristics of Panos Apergis collection, in brown, black and beige colour combinations. In addition, Zini Boutique offered a celebration and partying feeling while presenting its SS17 collection that is dominated by light garments that highlight the feminine elegance.  Fringes, special cuts, shirts, jeans shorts were the elements of Tassos Mitropoulos colletion with main colours the light blue, black, white, and orange.

AXDW was completed with a special, charity oriented fashion show event; Starwalk for a Cause. The most famous Greek models of the 80's and 90's walked for this initiative wearing the creations of significant Greek designers in order to support MDA Hellas, an association that supports people who fight against  Neuromuscular Diseases.

As final note, during the four days of the event, guests had the chance to view the collections of several Greek jewelry and accessories designers in the special exhibition section Xclusive Elements. Participating brands included E.T. Collection Creations by Elsa Toli, Eugene, Imisi, KNK Collection by Athina, Lifelikes, Proestilo and Tsili's by Tsili Katerina.