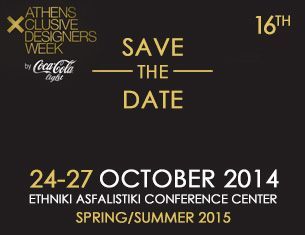 The 16th International Fashion Week, Athens Xclusive Designers Week by Coca-Cola light, will be held from 24 to 27 of October 2014 at Ethniki Asfalistiki Conference Center on Syggrou Avenue, presenting the trends for season Spring/Summer 2015.

Leading Greek and International designers, upcoming talents competing in the New Designers Awards by Coca-Cola light for prestigious prizes and unique parallel events will constitute the program of the 16th AXDW by Coca-Cola light, enabling people from Greece and abroad to discover the trends of the next summer.

Journalists, buyers, fashion bloggers, celebrities, entrepreneurs of the industry and people who just love fashion meet at the Athens Xclusive Designers Week by Coca-Cola light since 2007.

ΑXDW by Coca-Cola light continues supporting and promoting the Greek fashion globally by creating important relations between Greek and foreign markets through a network of partnerships with major operators of the apparel industry and with other international fashion events.

More information about the program of the 16th Athens Xclusive Designers Week by Coca-Cola light  will be announced in the near future.

Ethniki Asfalistiki Conference Center is under the management of Athenaeum InterContinental Athens.

More information about the event will be announced through the official website and social media of AXDW by Coca Cola light: