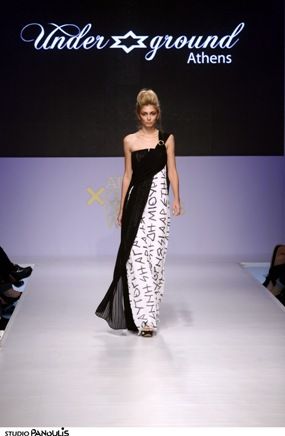 Underground is an established label in the Greek market for more than 15 years. Underground has reinvented itself since 2005 as a creative fashion team -lead by Katerina Gouma, head designer and co-owner- by launching its own collections, available through retail and wholesale in Greece, as well as selected retail spots around the world. The basic creative principles include a preference for natural fabrics, an omnipresent yet widely modern reference to ancient Greece and the Goddess Dress, plus persistence on cuts that create a perfect fit on the body. Uniqueness is a must for the Underground creative team, highlighted by the original prints designed for every collection and by the collaboration with Greek fashion’s “enfant terrible”, Apostolos Mitropoulos, for the creation of an exclusive diffusion line that has been a hit among the fashion crowd and Greek celebrities since its initial launch in 2006. Underground has further cemented its tradition in encouraging the creative talent of upcoming Greek fashion designers by sponsoring since 2012 the Best New Designer Award presented in Athens Exclusive Designers Week – producing and promoting in the media and the buyers an exclusive capsule collection by the winner.