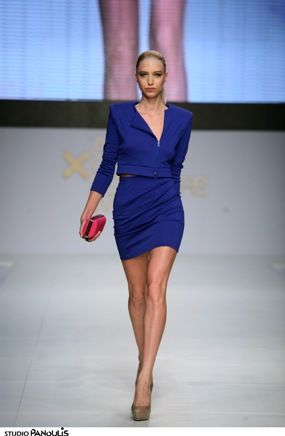 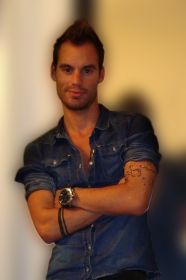 Manos Caravlidis was born in Athens in 1987. His interest in fashion led him to London College of Fashion where he studied Fashion Styling and Photography. Coming back to Athens, he continued his studies as a fashion designer at Pansik, Scuola di Moda. At the same time, he works in retail business for various global brands. By following his passion for creation and his adoration for women, he decides to launch his first collection S/S 2013 at Athens Xclusive Designers Week as New Designer.

This first collection is inspired by strong sexual and dynamic femininity, coexisting simultaneously in every single woman. The RUNWAY icon wants to express herself. Influenced by her female nature becomes sexy and dynamic in tight little dresses but in the same time vulnerable, sentimental and highly feminine in floating colorful silk.

It's a woman attracted by contrast, moving through time, meeting her idols from Rita Heyworth to Scarlett Johansson, Merlyn Monroe to Madonna and Bianca Jagger to Victoria Beckham. Her style reflects the cosmopolitan aura of Monte Carlo and the chaotic but still fashionable lifestyle of New York. After all, the RUNWAY icon 'dresses it her way....It's her RUNWAY'