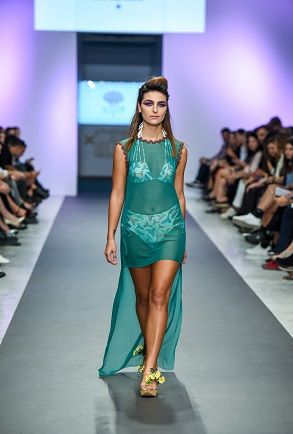 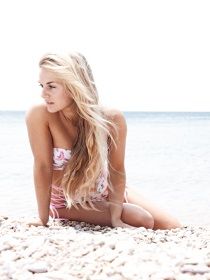 In ancient Greek mythology Nymph (Nymphē) was a female deity of nature typically associated with a partic­ular location or landform. Different from goddesses, nymphs were generally regarded as divine spirits who animated nature, and were usually depicted as beautiful, young maidens who love to dance and sing; their amorous freedom set them apart from the restricted and chaste wives and daughters of the Ancient Greek society. They were believed to dwell by springs and rivers, in mountains and groves, in trees and in valleys.

Valia Georgiadi is the Greek designer behind Nymphē swimwear brand. She is an active architect engineer gone rogue. She studied Architecture in the Polytechnic School of Patra and then went to London for a Mas­ters in Arts, in the Architectural Association of London. Simultaneously she attended Graphic Design courses at the famous Central Saint Martins College of Art and Design in London as she strongly believes that an architect should have a global view in the field of aesthetics and artistic expression.

She travelled and worked extensively around the globe and in 2009 she took the -pretty hard- decision of coming back to Athens, Greece and starts her own business. At 2013 she opened one of the first "all-inclu­sive" design spaces in Athens, with projects ranging from Architecture and Interior Design to Art and even bespoke fashion.

In love with fashion, the sea and with an eye for detail she decided to create her own swimwear and beach­wear line, of international standards, strongly believing that Greek swimwear should be known around the globe. After all, she believes that Greeks know sun and sea like no one else!