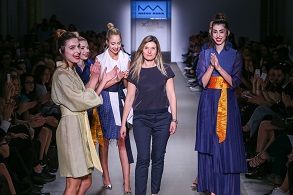 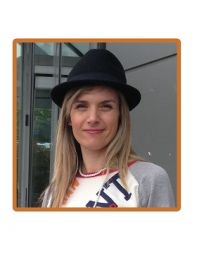 A mother of three and a full-trained working doctor until recently, Maria Nakou was born in Thessaloniki. After years of study and practice in the field of psychiatry, she decided it was time for her to learn something new and different. Her love for art and quest for creativity led her back to school, where she obtained a Bachelor's Degree in Fashion Design by AKTO in collaboration with Middlesex University of London in 2016.
In her first personal collection at the 21st AXDW, Maria Nakou has drawn inspiration from the french philosopher Jacques Derrida and his theory of deconstruction and incorporated the concepts of binary oppositions in her designs, namely the East and West duality, by bringing together aspects of the western shirt and traditional japanese clothes and stitching techniques.

Maria's passion in pleats and uncommon pattern designs is evident in her work, which aspires to capture the spirit of strong and independent women who consider themselves citizens of the world.