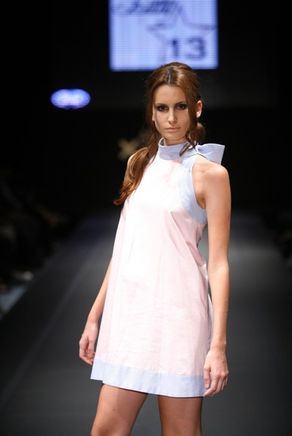 The creative duo of brand 'Lucky 13' consists of Monica Corito in the design field and Sweta Golovashina the implementation of the clothes.

Monica Corito raised in Athens, but has origins in Sicily, Italy. She attended courses in Fashion Designing Schools' A.K.T.O. art & design '. The immediate plans are the University of Paris where she will pursue her studies gaining degrees abroad. She has worked as an assistant stylist known serial, as a designer on popular women's clothing company and worked with famous department store in central Athens as Visual Merchandiser. Moreover, she has collaborated with artist Demosthenes Davvetas various performances as a stylist.

Putting plus the debut of her own name, participated in the competition for young designers at the International Fair of Salonika in 2008. The style of clothing is influenced from her Italian roots, wanting the woman dynamic, mysterious and sexy.

On the other hand, Sweta Golovashiva studied fashion design in the schools 'Zer-Fam' which was given the opportunity to show her own designs. She has worked in craft known women's clothing in the field of pattern. Currently working as a basic pattern cutter in a known atelier and creates dresses for her own clientele