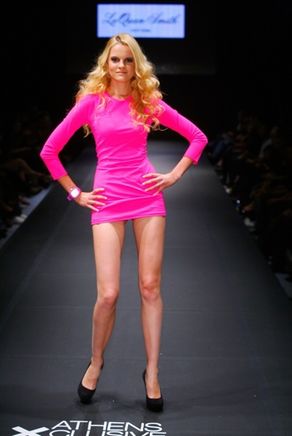 Launched in 2010 with a collection entitled "Water Goddess", LaQuan Smith featured handcrafted well-tailored clothing reminiscent of the ocean, sand, sea creatures, and ethereal goddesses. The LaQuan Smith woman is the personification of modernity, sensuality, and liberation in femininity.

After the worldwide success of LaQuan Smith, the designer decided to create a more wearable collection entitled "LQS" which is a more affordable diffusion line inspired by female athletes, with the main inspiration coming from muses Serena and Venus Williams. At the ripe age of 22, LaQuan Smith has had the opportunity to dress Tyra Banks, Rihanna, Sandra Bernhard, Lady Gaga, Alicia Keys, Dakota Fanning and countless other Style and Fashion Icons.

Touring his 1st collection around the globe from South Africa to the British Virgin Islands, LaQuan Smith has been making a name for himself as America's newest and youngest Couturier. Mentored by Andre Leon Talley and Diane von Furstenberg, LaQuan Smith is sure to be the next talented American in fashion and art.