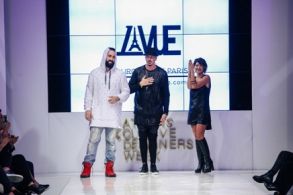 LaVue is more than just about a clothing line. It's about expressing individuality and identity through fashion. It's about approaching every day through a unique prism, one that reflects the uniqueness and individuality of its supporters. The name LaVue doesn't refer to just a sight, but rather to a perspective. A point of view that not only emerges through one's lifestyle but also defines one's character. Through the use of straight lines (a linear representation of everyday life) against black, white or grey backdrops, LaVue epitomizes both the simplicity and complexity of city life and distinguishes itself through the need to disagree with the establishment, the predictable, the mundane. It is that distinction that grows from a need to a habit and from a whisper to a clear, resounding voice that confidently says "I have my own outlook".