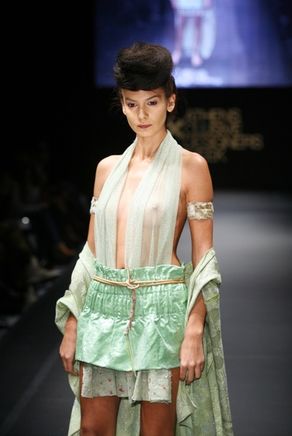 Born in Greece, started his fashion career in Athens where, after having his stylist diploma at the fashion school of 'Esmod Veloudakis, and his Masters Degree of History at the University of Athens, he worked as a freelance stylist for many prêt-à-porter companies ,where he presented his own collections, until 1991.

Living in Paris since 1993 he worked at Carlin Style Office for the creation of the fashion trends books, from 1993 to 1996 he wrote a book about 'The sexual Function of the Occidental Clothing' subject of his D.E.A. ' Diplôme d'Etudes Approfondies' in Historical Anthropology at the E.H.E.S.S. ' L'Ecole des Hautes Etudes en Sciences Humaines' 1994-1997.

After a short training about management, in 1998 he created GUIA llc, in 1999 and since 2000, he is presenting his collections every season during the Fashion Week in both Milan and Paris.
Ioannis Guia's line, totally made in France offers high luxury ready to wear creations elaborated following the principal of handcrafted realisation; they are actually for sale, around the world in many multi brands shops 'haut de gamme' his designs have attracted the attention of the international press in many occasions.

One of Ioannis Guia's creations has been exhibited at the Louvre Museum in an exposition entitled 'Jouer la Lumière' in 2001-2002 and two others, in the exposition about the New Generation of Fashion Designers in Paris at the Galliera Museum, in 2002