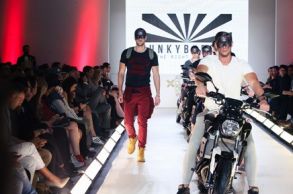 brothers and entrepreneurs from Europe - Greece.

What started off as a casual business trip for them, turned into an epic adventure through the highs and lows of the Far East.

Seeking initially to research business opportunities, a delay at a local train station resulted in a major detour. They returned from it with crates and stories!

The rising sun flag became the brand's symbol and an inspiration for what has become a highly successful idea:

to make great garments that suit every individual, reflect ones personality and make you feel at ease.

directly a hit, surpassing expectations and setting the standards for further expansion of the

brand. In just a few short years and with the collection becoming richer and more complete the commercial success of the European company took off.

Funky Buddha has become in a short period of time the cult brand for those who love to wear clothes inspired by values such as freedom, respect for the individual and respect for the environment.