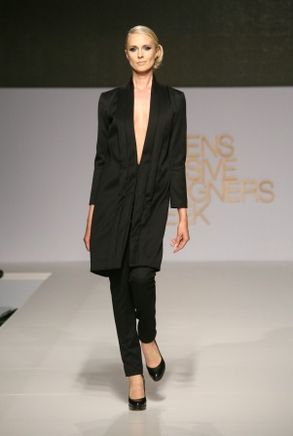 Chara Lebessi was born in Athens and studied Information Technology, Public Relations and then she enrolled at a Greek fashion school studying Fashion Design. It was the first prize she won in 2001 at the First Hellenic Wedding Dress competition that made her turn into fashion decisively and continue her studies in London, at the prestigious Central Saint Martins College.

On August of 2002, London Designers Ltd bought the entire collection of the Greek designer. Their collaboration still goes strong. Since then, Chara is designing her collections twice a year and she has designed gowns for many female artists, actresses and singers of the Greek showbiz. As a member of Hellenic Fashion Designers Association, since March 2005, she has participated in many Hellenic Fashion Weeks, presenting her new collections.

On July 2006, she presented her Fall-Winter 2006-07 collection in Belgrade, to raise funds for Princess Aikaterini's charity for orphans. On October 2007, she presented her collection at "Vendome Luxury Trade show" which was held at the hotel Ritz in Paris, France. On October 2008 the TV channel Aljazeera International chose Chara as the new Greek designer to present her work at the show "48 Hours", dedicated to the capital of Athens. From March until May 2010, two gowns of her collection were displayed at the exhibition "TO DRESS" at the BENAKI Museum in Athens, Greece.

On July 2010, after the invitation of the Greek Ambassador in Serbia, Chara displayed her collection at Belgrade, representing Greece at "Belgrade Fashion Nights", which presents established European Designers and Brands.