TwoAs edited the windows of H&M 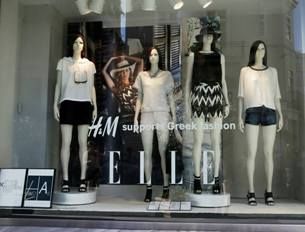 Athens Xclusive Designers Week associated with H&M in order to support the Greek fashion and the new designers by giving the "Best Trendsetter" award at the New Designers Awards of the 15th AXDW. The representative of H&M at the New Designers Awards was the country manager of Greece & Bulgaria, Mrs. Dominique Fantaccino who is working for 13 years at the international fashion industry with headquarters in Paris.

The designers of the brand TwoAs were the winners of the specific category and that was the beginning of a wonderful journey in the field of Greek fashion starting with the two flagship shops of H&M - in Athens, Ermou 54 and in Thessaloniki, Tsimiski 20. Aris & Marios Antoniou as the "Best Trendsetter" winners edited exclusively the store windows with Summer looks and also the windows will be presented at Elle Magazine contributing to their further recognition in the fashion industry.

Athens Xclusive Designers Week through the institution of the New Designers Awards, which is held every season, supports actively the new talents that desire to make their dream come true and to be distinguished not only in the Greek fashion industry but also abroad.