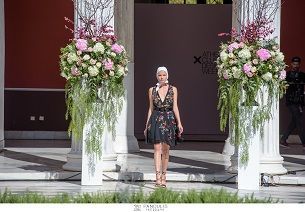 The highlight of this edition of Athens Xclusive Designers Week was a very honorary special guest: The famous "regina delle rose", Mrs Anna Molinari, founder of Blufin, attended the event as the special guest of honour, and realized the global debut of the S/S 18 Blugirl collection through a breathtaking fashion show at the "Peristylion", the majestic colonnade of Zappeion Hall.

The iconic Greek fashion brand Parthenis led by designer Orsalia Parthenis, presented an exotic warlock look inspired by 19th century Patagonia. The camouflaged body, such as the painted body of tribal initiation rituals is decked to sustain contemporary life either at work or leisure. Rich fabric textures and loose forms embellished with prints express the primal need of a life closer to nature through the prism of technology.

The famous fashion house of Kathy Heyndels showcased its new collection, mainly focusing on feminine and subtle eveningwear; female slides, lace details, silk dressed adorned with gemstones and Swarovski crystals, were some striking elements of the new collection. The men's brand Giannetos Handmade complemented the show with men's costumes and tuxedos. The famous actor Zeta Douka walked on the runway for Kathy Heyndels in a guest appearance while the singers Josephine and Kostas Martakis gave a live performance during show.

The second day of the organization was dedicated to New Designers Awards and young creators who presented impressive collections to the public and jury, contesting for the important awards Best Catwalk, Best Trendsetter and Best New Designer, which correspond to significant prizes for their forthcoming career in fashion. The award ceremony was held in the splendid colonnade of Zappeion Hall. The presenter of the evening was the knowledgeable model Vicky Koulianou.

The fashion design department of AKTO ART & DESIGN COLLEGE opened the New Designers Day, with a show presenting the creations of 30 graduates of the department. Also, the fashion school Athens Fashion Club, also participated with a fashion show, showcasing a total of 112 outfits designed by the students of the school.

This year, like every season, important representatives of the fashion industry honored the Organization with their participation in the jury:

The winners of New Designers Awards are:

Best New Designer: Blondie E. with designer Eleftheria Kardami who presented her collection «Blue Eyes» which was inspired of "elastic reality". The fast changes in the rhythm of daily life...

Best Trendsetter: Maria Nakou won the second price presenting her new collection «Sailing» which has drawn inspiration from the sailboats. Shades of blue, white, beige and yellow had a leading role.

Best Catwalk: Irene Angelopoulos won the third award with her collection «Dessert Flower» which was inspired by the bestseller of Waris Dane. Impressive pret a portet de luxe and haute couture garments characterize her collection.

The famous Greek fashion designer Vasilis Zouliαs impressed the guests with his new Pret-a-Couture collection «Women in the garden, the Summer Edition» which is a celebration of the women in his life. The Zappeion Garden was the perfect scenery for magic to unfold, in a show accompanied by the sounds of the Philharmonic Orchestra of Athens. Long evening gowns, cocktail dresses, theatrical details and fine fabrics such as silk, brocade and laces were quite prominent creating a world of excellence, wit and style. Timeless creations decorated with impressive jewelry by Pericles Kondylatos.

BAYA.fit, the new and stylish "Made in Greece" Luxury Activewear Label, that visualizes, designs and crafts limited edition sportswear, showed a stylish sport collection with leggings and swimwear, with main motto Be as You Are.

The brand Brokers presented its new collection which include modern and stylish men's clothing, casual wear and denim-based outfits, ideal for the fast tempo and quick rhythms of the city.

The new collection of Celebrity Skin "Tears of a corpse" was edgy, airy and dark, a return to the designer's most avant garde origin. Lace, pearls and crystals are some of the materials Dimitris Strepkos, designer of the brand used. Like always, the Celebrity Skin catwalk became a parade of well-known celebrities, such as Vicky Koulianou, Sophie Paschali, Ada Livitsanou, Jenny Melita, Elena Galifa, Katia Nikolaidou, Maria Enezli, Dj  Airth and Stelios Kritikos, who walked on the runway during the fashion show as guest appearances.

The popular brand Zini Boutique presented the new "Ready to wear" collection which was inspired from the modern lifestyle of contemporary women. Glitter and glam from the 70's, checkered textiles and berets are one of the main global trends. During the show the eccentric performer Gabriel Gueye with Dj Anjelo gave a unique live performance, creating a truly uplifting atmosphere with energetic vibes.

The fourth and final day of Athens Xclusive Designers Week begun with a fashion show that resembled to a dreamlike fairy-tale, the Blugirl Spring Summer 18 fashion show, which took place at the magnificent Peristylion, the circular colonnade within Zappeion Hall. The show was marked with the personal presence of Mrs Anna Molinari herself, who is currently celebrating 40 years of contribution in fashion and chose Athens and Athens Xclusive Designers Week to make the first global presentation of her new Blugirl SS 18 collection, titled "Femininity-a-Porter".

Paisley motifs, delicate ribbons, bows and frame pictorial flowers are some of the striking elements of the new Blugirl collection. Intense and deep shades of forest green, vibrant cherry and strawberry red, offset by the subtle elegance of blush and beige. Chiffon and twill fluid and flowy silhouettes were accompanied by soft yet demure volumes. Recurring ruffles offered understated details of enhanced geometries. Anna Molinari's new Blugirl collection, interprets femininity as a wearable blooming garden, reflected in the personality of every woman.

Folli Follie the Greek international lifestyle brand showcased its new jewelry collection "Metal Chic", in a fashion show adorned with the gowns and creations of renowned Greek fashion designers. Minimal lines and geometric shapes, in metallic shades of gray, gold and pink are dominant in the new jewelry collection. Folli Follie's core philosophy is to unveil the brightest side of women internationally, by offering a collection of versatile and fashionable designs of jewelry, watches and accessories.

Αvgousta Theodoulou, winner of "Best New Designer" award in April 2017, presented her first complete collection "Bodies out of Frames". Handmade techniques and shades of grey had a leading role in her creations.

"City Lights" is the new collection of the all-time classic designer Olga Karaververi which included airy cocktail dresses and elaborate Haute Couture evening creations. Dresses that highlight the elegance and femininity of every woman who chooses them. The outfits were completed by coats with special designs made of cashmere.

The 22nd Athens Xclusive Designers Week was completed with the thrilling show of MI-RO, which took place at the Athens Conservatoire. Greece's favorite duo, Dimitris Mastrokalos and Giannis Raptis, presented the Couture Collection "Garden of good and evil" which is based on intense contrasts and dramatic elements. Breathtaking metallic flashes as well as velvet and tulle dresses were main features in the collection. Shades of pastel, black, and purple impressed the audience and lead to a dreamy atmosphere. The Men's Sur Mesure which were presented in the show were made entirely in various fuzzy shades of gray. Decorated with chrysanthemum patterns, the oversized jackets and coats were in great contrast to short skinny pants, a proposal that reminded the 80's and the New Romantic movement.

Throughout the four days of the fashion week, AXDW's open design contest Fashion Design Project took place, giving contestants from various academic backgrounds, the opportunity to design and submit their fashion sketch and be nominated for a participation at next season's New Designers Awards. Projects submitted will be posted for online voting by the public in the forthcoming weeks.

Finally, this season Athens Xclusive Designers Week had the honor to support the Bring Them Back campaign (www.bringthemback.org, https://www.facebook.com/BringThemBack/) aiming to the return of Parthenon sculptures and the reunion of the monument. In this context, the 22nd edition of Athens Fashion Week hosted the campaign's booth and invited all participating designers and visitors to say their own "Bring them Back" and contribute to this great purpose, spreading the message in order for the Parthenon sculptures to return to their rightful place, Athens.

For more details and information for AXDW: