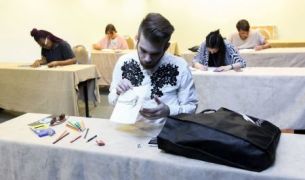 The open voting has started!
The emergence of the next big winner of the fashion design contest of the Fashion Week of Athens is in the hands of public

The open online voting process for the fashion design contest Fashion Design Project of Athens Xclusive Designers Week, is now active! Public can vote and bring out one of the 43 applicants that they created their own fashion sketch and applied for the Fashion Design Project contest, in order to ensure their participation in the New Designers Awards of the upcoming edition of 20th AXDW.

The Fashion Design Project and the open voting takes place for the 6th consecutive season under the actions of the International Fashion Week, Athens Xclusive Designers Week. The goal of the Fashion Design Project is to give the opportunity to young people, regardless of their studies and employment, to bring out their design talent, try their hand and take their first step in the world of fashion. Each creator submits his candidacy at the contest, drawing a fashion sketch, which will be evaluated and voted by the public. The candidate creators design their sketches during the Organization, in an atmosphere that exudes fashion and in an artistic competition climate and sportsmanship. The applications shall be obtained and published on the official facebook page of AXDW. The applicant that will be voted the most will ensure his participation in the next Organization as a new fashion designer in the New Designers Awards, even though his previous vocational training has no direct relation with Fashion. So, through the Fashion Design Project, hidden talents and young gifted people are discovered and they have the opportunity to make their dream come true.

Visit the facebook page of AXDW and vote via a special application one or more favorite sketches for the Fashion Design Project: https://axdw.ourcontest.io/xHR3Kf. The applicant that will be voted the most will ensure his participation in the New Designers Awards of next AXDW. The voting process for the next winner of the Fashion Design Project will be active until Wednesday, August 24th, 2016. The name of the big winner will be announced on Monday, August 29th, 2016 at 12:00.

Athens Xclusive Designers Week continues strongly with joy to support young creators, with aiming to discover, highlight and promote them in and out of Greek borders and connect them to the global fashion scene.