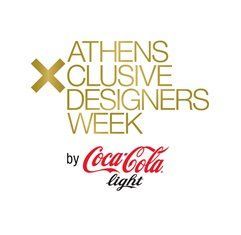 Returning back this October 2014, Athens Xclusive Designers Week (AXDW) which already has 15 consecutive successful seasonal showcases in its assets, provides designers a professional platform from which they can penetrate new and existing markets, attract local and international Media coverage and achieve greater sales opportunities, while also discovering and promoting new talent, styles and trends to the watching media.

Coca-Cola light, the favorite drink that adores women and fashion, promises the Greek public another yet unique fashion experience and therefore becomes the big protagonist of the ultimate fashion event in Athens.  Coca-Cola light will continue working alongside BSB company for the creation of a fashion accessory-a surprise, which will exclusively be presented for the first time during the event.

The 16th fashion week in Athens, Athens Xclusive Designers Week by Coca-Cola light, will take place from the 24th until the 27th of October 2014, at Megaro Ethnikis Asphalistikis, with the participation of Greek and foreign designers, as well as emerging talents of the Greek stage of fashion design.

More information concerning the program of the event will be announced soon through the website and the official sites of the social media: