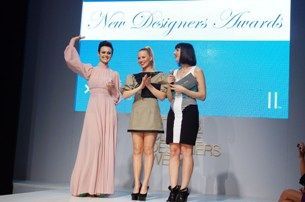 The international fashion week of Athens, Athens Xclusive Designers Week (AXDW), loyal to its mission to support, enhance and export Greek fashion, constantly expands its partnerships' network with international institutuions in the fashion sector and promotes Greek designers abroad, even in this difficult juncture for Greece.

As part of AXDW's cooperation with leading fashion institution globally, and specifically the European Fashion Council, the Greek Fashion Week assured the nomination of the Greek fashion designer, Lila Nova in the 11th Bulgarian Fashion Awards 2015 among 27 nominees for Europe.

The Bulgarian Fashion Awards, which take place under the supervision of the National Fashion Chamber of Bulgaria, have institutionalized an annual "Fashion Week" Prize Fund since 2011, dedicated to the 11 finalists from all over the world, and its distribution is based on an open vote to the public, while the names of the 11 finalists are included in the Exclusive Designers List for fashion styling in Bulgarian Music Awards.

For 2015, the prize corresponds to € 110,000 and ensures a long-term funding program of the winners' shows in the Bulgarian Fashion Week and international co-operations between European Fashion Weeks, in which there are 24 countries, and among them, Greece with Athens Xclusive Designers Week.

Furthermore, especially in 2017, the international winner of the Bulgarian Fashion Awards 2015 will be positioned with a very innovative way in the International Fashion Museum, in Plovdiv, where robots representing the winner and a model of his collection, will sign autographs for the public.

It is noteworthy that this year's Awards are named EIRENE by the name of the Greek goddess of Peace, while the Greek nominee, Lila Nova, is competing along with great names of international fashion such as Ann Demeulemeester, Agatha Ruiz De La Prada and the Acne Studios!

The vote for the 11 finalists began on 13rd July and the big winner will arise until Wednesday, 15th July!

We can support the Greek participation by voting to the following link: https://www.facebook.com/BulgarianFashionAwards/posts/929634097102566

More details about the Greek nomination in the Bulgarian Fashion Awards you can visit the official website and the official social media pages of AXDW: