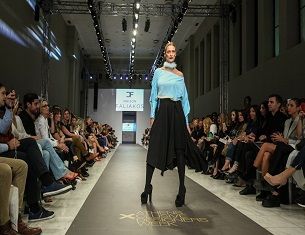 The four day event of Athens fashion week "Athens Xclusive Designers Week" which was realized between 21st-24th October 2016, was successfully completed, full of new fashion trends, creativity, new talents, brilliant presences and many happenings! This season Athens Xclusive Designers Week celebrated its 10th year anniversary and as part of this celebration the event was held at Zappeion Hall, one of the most historical sites of Athens.

Fashion designers who showcased their S/S 2017 collections include .LAK by Lakis Gavalas, Boško Jakovljević, Dimitrios Ordoulidis, ICHI, Olga Karaververi, Kathy Heyndels, Loukia Kyriakou, Maison Faliakos, Nassos Ntotsikas, Ocean Blue by Marcia Thrasyvoulou, Panos Apergis, Peace & Chaos, Reveal Crochet, Rita Pateroni, Tassos Mitropoulos, the Artians, Vassilis Zoulias and Vlassi Holeva presented their new collections on the catwalk of the 20th anniversary AXDW. The third day of the organization was dedicated to young creators and New Designers Awards by Bioten, who presented impressive collections to the public and jury, contesting for the important awards Best Catwalk, Best Trendsetter and Best New Designer, which correspond to significant prizes for their forthcoming career in fashion. The award ceremony was held in the splendid colonnade of Zappeion Hall. The presenter of the evening was the excellent journalist and presenter, Christos Nezos.

The talented designer Nassos Ntotsikas presented his S / S 2017 collection, Knit Chemistry, inspired by chemistry and minerals. The "compounds" of cotton and silk, of scrim with brocade created airy creations with metal drape and intense flashes of pink and aqua hues.

The luxury lifestyle fashion brand Ocean Blue by the designer Marcia Thrasivoulou from Cyprus, impressed with its summer proposals. Unique swimwear with cuts in black, blue, coral and other colors, were accompanied by gorgeous caftans in vivid colors, which created a breezy summer atmosphere.

The famous fashion house Vlassi Holeva made a powerful come back relaunching the brand, as part of expanding its activities, creating a new series of collections. The fashion house presented the F / W 16-17 collection entitled AVH, with dresses in girly-chic, glam rock and casual-chic elements.

Inspired by the Baroness Fiona Von Thyssen, who was also present among the guests of the show, Vassilis Zoulias presented the new S / S 2016-2017 collection entitled "Fiona", in a unique setting in the colonnade of the Zappeion Hall, on Saturday. Timeless creations decorated with impressive jewelry by Pericles Kondylatos, beautiful ruffles, amazing, long, elegant dresses that emphasize the femininity of every woman, impressed the guests. Vasilis Zoulias creations were accompanied by the uniquely luxurious watches of IWC Schaffhausen. Famous models Isabella Dara and Vicky Kaya attended the fashion show with a guest appearance.

Olga Karaververi showed dresses that highlight the elegance and femininity of every woman who chooses them, in white, black, gold and red, while closed the show with stunning wedding dresses.

The Artians, the brand of Konstantina Kampisopoulou impressed the guests of AXDW, showing the S / S 2017 collection, "The Sayades", inspired by the traditional Greek costumes of 1900. The creations of the collection flirt with the monochromatic sea palette and the Greek light.

The Danish brand ICHI, with motto "The Fine Art of Being You" introduced its creations, casual outfits, girly dresses and skirts and airy shirt for first time in Greece.

The fashion brand .LAK by controversial designer Lakis Gavalas presented the collection 2yatrue, with a particular concept, where an ambulance arrived on the exterior of the Zappeion and the sirens gave the signal for the show to start. His collection was inspired by medical outfits which were transformed into casual, everyday wear.

This year, like every season, important representatives of the fashion industry honored the Organization with their participation in the jury: Ioannis Vagenas, Director of Jewellery at Rainbowwave showroom in London, Mary Kallimasia, Director of the women's magazine Votre Beaute, Makis Tselios, one of the most established fashion designers in Greece, Martin Premuzik, owner of Temporary Showroom in Berlin and Myra Postolache, fashion editor for 4 magazines in Milan and Los Angeles and buyer agent for Mad Zone Multi label store in Milan.

The winners of New Designers Awards by Bioten are:

Best Trendsetter: Ioannis Roumeliotis won the second prize, presenting his collection which is inspired by EROS god. Modern lines and fabrics like silk, wool, cashmere, silk organza were mixed with handmade textiles and ornate embroidery of silk thread and pearls, which were accompanied by handmade jewelry, shoes and constructions

Best Catwalk: The brand Athena, by Athena Karatzogianni presented the collection Theofilos, inspired by the Greek folk painter Theophilos, taking elements from his work, himself and his everyday life. The colors that dominated was the blue of sky and water, the ecru of linen canvas, corrupted with subtle plaid weave and embroidered with motifs of his works

Boško Jakovljevic, one of the most popular figures in Serbia and the invited designer of the organization presented masculine, modern suits in black, blue, burgundy and gray and plaid fabrics.

The Cypriot Designer Loukia Kyriakou presented haute couture creations. Impressive, airy, feminine dresses, with special lace and some of them decorated with rhinestones and pearls that highlight the femininity of every woman.

The brand Peace & Chaos by Nefeli Alan and Dimitris Pantazis showed their collection "Down to Ride". The collection includes elements of Athleisure style combined with fencing and metal fabrics, ideal for every occasion.

Additionally, during the four days of the organization, guests of AXDW had the opportunity to visit the section Xclusive Elements, an area dedicated to Greek artists of fashion accessories: 7pm leather jewel by marina panagiotoulia, DOT., Eugene, E.T. Collection Creations by Elsa Toli, imisi, The penguin, My Bling, this.is it, Tsaroucha Collection.

In the same time, AXDW's open design contest took place throughout the event, the Fashion Design Project by Blue Beetle, which gives contestants the opportunity design and submit their fashion sketch and be nominated for a participation at next season's New Designers Awards. Projects submitted will be posted for online voting by the public in the forthcoming.