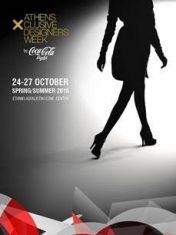 32 established and new Greek fashion designers meet in Athens, at the premiere fashion platform of Greece, from the 24th until the 27th of October!

The International Fashion Week of Athens, now in its 16th showcase, the Athens Xclusive Designers Week by Coca-Cola light is about to renew its appointment with 32 participating fashion designers from 24 to 27 of October, at the Ethniki Asfalistiki Conference Center on Syggrou Avenue, who will present for the first time their Spring/Summer 2015 collections.

One of the most legendary fashion houses of Athens, characterized of its elegance and fine taste, the fashion house of Vassilis Zoulias will open the event. On the first day of the 16th AXDW by Coca-Cola light, the designer Vassilis Zoulias will showcase his New Resort Collection S/S'15, having as a source of inspiration Miss Hellas and Top Model of the 60's Mrs. Iakinthi Karaviti-Politi.

Rita Pateroni, one of the top established fashion houses in Greece will follow with a new collection. More than 30 years of all-time classic fashion in Europe, Asia and America characterizes the fashion house Rita Pateroni, where Rita and Liana, mother and daughter, share the designing part and create collections of high femininity and a personal point of view.

Haute couture creations, wedding dresses and also prêt a porter collections that stand out thanks to their personal touch of style and the mix of unique, different materials will be presented by the fashion house of Kathy Heyndels. Head of fashion house, Yiannis Togos, will present his new collection at the 16th Athens Xclusive Designers Week by Coca-Cola light.

Two upcoming, talented designers are going to meet under the known fashion label Underground, showcasing the collection each one designed for the label.  Lila Nova and Loukia Kyriakou were both distinguished as Best New Designers, during the New Designers Award fashion business competition of the AXDW. Their distinct styles, Lila's distinct fairy-tale chic style enriched with vintage references and Loukia's safari / utility glamour will be portrayed in the Underground collections. At the 16th AXDW by Coca-Cola light, Lila Nova will present her fifth collection for the label, while Loukia Kyriakou will present her second.

The first day of the event will come to an end with the creations of the well-known fashion designer Apostolos Mitropoulos, who has been designing for the Underground label, since the winter of 2006. Basic clothing characterized though by unique details, a dynamically sexy touch and a powerful, unique style make the creations of Apostolos Mitropoulos for Undergound the "it" choices for the fashionistas crowd.

On Saturday the 25th of October, the catwalk of the 16th AXDW by Coca-Cola light will host the creations of Giota and Ioannis Constantinou, the design duo of the fashion company Join Clothes. Join Clothes label applies the fundamental principles of architecture and creativity, which result in flexible, modular, one size clothing of multi uses. The clothes can be matched together creating layers and based on their easy-to-wear style, they can be worn from morning to night.

The reputation of the fashion brand Stylianos has managed to pass the local borders when the designer has been assigned to create an exclusive line for the Cabin Crew Uniforms of "ALPHA STAR aviation", the private airline of the royal family of Saudi Arabia. Following his studies at the legendary Instituto Maragoni in Milan, Stylianos had been the creative director of the fashion house Bridal Konstantinos until he created his own fashion label. His past participations in AXDW evoked high impressions in the audience, first by the fantastic finale of celebrity Doukissa Nomikou wearing a bridal gown embroidered with 1800 Swarovski crystals (collection Contrasts, FW 2012-13) and one season later when he won the «Best New Designer» award in the AXDW competition aiming in discovering new emerging talents.

Inspired by origami art, cinema films, MPVs, Lego, architecture and more, Katerina Vamvaka, the designer of Gaffer & Fluf creates a fascinating collection of clothes which can be adapted to the tailor-made needs and style of every person. Clothes that evolve during the day, which is the idea behind her creations, go further than a fashion conept and reply to the need for personal expression. Katerina Vamvaka's big experience in costume design for theater, TV, cinema and commercials has contributed in her understanding of the uniqueness of each female body and how to make the best of each every time.

The brand SOMF will participate for a second time in the Athens Xclusive Designers Week platform. The designer of the brand, Mariaflora Lehec, had graduated from the Central Saint Martin Art School and worked with some of the leading fashion designers in Britain. She is also well-known as a fashion blogger for her award-winning blog www.miss-athenes.net.

The second day of the event will end with the creations of the fashion designer Athina Korda. Geometrical, strict lines, dark colors and contrasting materials compose the personal style of the designer, who is going to participate for a third time in the 16th AXDW by Coca-Cola light.

On Monday 27/10 the shows will start with the designer Notis Panayiotou, who started from jewelry creations and after a long career in show business he entered the market of fashion design. The Cypriot designer is known for the sexy stye of his collections.

Coming next, the new fashion designer Spiros Stefanoudakis was awarded the prize of «Best New Designer» of AXDW New Designers Awards for his second collection. The designer has collaborated with many artists, costume designers, magazines and TV shows and will come to the AXDW with a new collection that will astonish us.

Celebrity Skin means avant garde, theatrical, stunning accessories, obsessed with black and of course with ... celebrities on the catwalk! The duo, Dimitris Strepkos and Eleni Barla, has standed out since the beginning of its carrer: Greek and international media write about their collections, they participate in fashion and art events, while their celebrity clients are constantly growing: Ada Livitsanou, Natasa Kalogridis, Jenny Botsi , Dimitris Vlachos, Pemi Zouni etc.

The collection "Surya Namaskar" S/S 2015 of the talented designer Paris Valtadoros is another collection anticipated with high interest, since the designer is influenced by the body posture as seen in Yoga exercises.

The 16th AXDW by Coca-Cola light will close by Panos Apergis, the designer who has long experience in fashion and had worked as a stylist in magazines, television and film. The ethnic element prevails in his collections and he succeeds to stand out by his personal style featured in clothing and accessories.

Moreover, the competition "NEW DESIGNERS AWARDS", now in its seventh year, will take place, proving once more its mission to discover, support and promote the next generation of emerging design talent throughout Greece. The competition of this season is sponsored by Coca-Cola light, proving once more its intention to embrace and support the effort of new designers who will themselves participate by a creative catwalk happening in Coca-Cola light's "Feel your heart" program, a Corporate Social Responsibility initiative to support the purpose of the of EELIA (Hellenic Society of Lipidology, Atherosclerosis and Vascular Disease). Finally, the NDA by Coca-Cola light will host two group participations, aside from the competition, by the students and undergraduates of the specialty of Fabric and Jewelry of the Municipal Institute for Vocational Education and Training Volos [ KEKPA - DIEK ] and the students of Fashion Design & Pattern-Sewing of Theia lab.

Last, but not least in the competitions taking place in the 16th AXDW by Coca-Cola light comes the Fashion Design Project, now in its third consecutive time taking place, which is a design sketch contest addressed to talented people wishing to make their debute as emerging fashion designer, being students of fashion and arts or even innate rough talent coming from the mass audience. The winner is voted online by the visitors of the Facebook page of AXDW.

Coca-Cola light, the favorite drink of women which watches and embraces the fashion trends, supports as a Diamond Sponsor for the first time the organization of AXDW as a title sponsor and will give its own mark with surprises and a lot of Coca-Cola light for all the attendees. Moreover, during the 16th AXDW by Coca-Cola light, Coca-Cola light will launch for the first time the new accessory - symbol of the campaign "Feel your heart" created by BSB top fashion company especially for the Coca-Cola light, continuing its initiative to support the purpose of the Greek Company Lipidology, Atherosclerosis and Vascular Disease ( EELIA ) to inform women about cardiovascular diseases. The visitors of the 16th Athens Xclusive Designers Week by Coca-Cola light will have the chance to buy the accessory in a special price at the venue, while all the money coming in from the purchased limited edition fashion accessory will be donated in the support of EELIA.

Belvedere Vodka, the super premium vodka from Poland, supports fashion and its creators and will become ​​for once again the sponsor of the International Fashion Week in Athens! The World Class bartenders of Belvedere will create Belvedere signature cocktails for VIP guests of the event in a stunning new bar designed especially for the Belvedere vodka! Moreover, a specially designed competition will take place during the days of the event, the competition ‪#‎BelvedereStyle by Belvedere Vodka, calling the guests in the venue to get photographed by a professional photographer and looking for the  best Street Style Fashion Icon among the guests of the 16th AXDW by Coca-Cola light, so as to award him or her.

AbbVie, the biopharmaceutical company, will participate in the 16th AXDW by Coca-Cola light with an innovative way, a special catwalk happening that aims to inform and raise awareness about psoriasis: a non-contagious disease of which about 220,000 people suffer in Greece. With the message "Maybe you see the wrong picture", this action urges the public to understand better the reality that is experienced by patients and review any prejudice. The initiative is part of the Corporate Social Responsibility program of AbbVie aiming in improving the life quality of patients.

The hair styling for the shows of the 16th AXDW by Coca-Cola light will be created using products of the British fashion lover brand Toni & Guy Hair Meet Wardrobe, the "Official hair sponsor" of the event, which are loved by millions of women for the irresistible style and the unique "touch" that they give to every appearance!  The hair styling team will be consisted of professionals of the Diamantopoulos School of hairdressing as they do every season and will be led by Vasilis Diamantopoulos himself.

During the 16th AXDW by Coca-Cola light, guests will have the opportunity to meet the beneficial properties of a drinkable miracle, of the top drinkable collagen, Collagen Pro-Active that benefits both beauty and health!

The audience of the fashion week will be able to visit the unique showroom of Alexia Fashion which has creations by Greek designers and will be at the venue during all days.

More information about the program will be announced soon, through the website and other official sites of the social media: